For every great movement, there is a great leader; a person who shakes the system at its foundations, to rebuild a truly visionary future.

At Odyssey, we pay tribute every month to the extraordinary women who are courageously changing our world for the better. 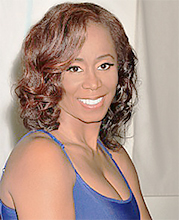 LaFaye Baker has made her mark as one of the few noted African American stuntwomen in Hollywood. Throughout her 20-year career, she’s doubled for over 40 of Hollywood’s top-tier actresses, including Halle Berry, Angela Bassett, Regina King, Regina Hall, Vanessa Bell Calloway, Lynn Whitfield and many others.

Recognizing her often overlooked peers in stunts, Baker founded the Action Icon Awards, which acknowledges the unsung sheros in Hollywood; Lindsay Wagner, Jamie Lee Curtis, Vivica Fox, and Gold Medalist Gabby Douglass among them. She’s also the founder of the Diamond in the RAW Foundation, a non-profit designed to support at-risk teen girls, and support them in pursuing truly extraordinary careers.

For more from Baker, and her unique perspective, check out her 2015 film “Hollywood at it’s Best” (soon to be featured in The Smithsonian Institute), and in the pages of Entertainment Weekly, Essence Magazine, Jet, The Wall Street Journal, Scholastic News, and Rolling Out, among others.